I’m not a spiritual person, nor am I religious, but some things in life change your perspective ever so slightly. Not to the point that I am going to join a convent or have ghost hunters in my house, but just to the point where I think maybe I was a narrow minded cynic all this time.

6 and a bit months ago, I would have told you categorically that when people die, there is nothing. I have been told stories of when I was a child and used to talk to and see people that weren’t there, nothing that I can remember, or believe though. I spent the entirety of my life that I can remember not believing in anything other than life. Even the concept of life and earth and the Universe dumbfounded me, so to then try and understand something further than that was beyond my capabilities!

That changed when Jason died.

How could my strong, fun, passionate and incredibly energetic Husband be reduced to nothing? How could someone so full of life be just gone? Over? I couldn’t accept that.

He HAD to be somewhere. His amazing mind couldn’t just cease to function any more. Where did his memories go? His abilities? His energy?

Things changed a lot when a wonderful friend of mine told me that energy can’t be destroyed, only transferred. She used to be a Physics teacher, and just that one sentence gave me a glimmer of belief that maybe he wasn’t ‘gone’. Understandably I doubt how wise she is every time she makes a brew, because her brews are shocking and require supervision, but something about what she said stuck with me!

In the days after Jason died, I found a new strength that certainly wasn’t there before. The children found a new humour, and the life around me had a new beauty. I had a new outlook, one very similar to how Jason lived his life. I like to think that his energy was transferred to the boys and I, not wasted as I had previously thought. Science is awesome, don’t you think?! If an entire Universe can be magically created, with everything needed to sustain human life (still undecided on that one, sorry), why can’t my Husband’s qualities be shared among his loved ones?

The ‘afterlife’ is something else that I didn’t ‘believe’ in, however, I started to talk to him anyway. I felt like IF there was a chance he could hear me, I had to take it. I was clinging to a hope that I had never wanted before.

The night he died, between various vomiting trips and internet time, I tried to sleep. One of those times I was crying so hard that my whole body was hurting. My chest felt like someone was standing on it, and my face felt like it was on fire. I bet I looked terrible! I was ‘talking to Jason’, telling him I missed him, and that I loved him, and probably not really making much sense. I said I needed him, then carried on the crying. About 15 seconds after I had stopped speaking, my crying suddenly stopped. I could feel, from my head to my feet, the tension leave my body. My face felt fine, my chest felt fine, and I felt a huge warmth around me, like a second layer of heat all around me. There was no stupid breathing like you usually get after a good cry, and no aches. I felt completely calm. I fell asleep right after that, only for 10 minutes or so, but I slept!

On the 14th September, two days before Jason’s funeral, I woke up feeling very different. I picked up my phone straight away and wrote this:

That dream was the most real dream I had ever had. It was the first one I had with him in it. I could feel him holding me, and could feel the same warmth I had felt the night he died. It isn’t something you can explain, apart from saying that it felt real. As though he was saying Goodbye, right before the funeral.

The third and final ‘experience’ I have had, was only a couple of weeks ago. For some reason, out of nowhere, I was having a bad day. I went to bed, and I cried more than I have done in a few months. I felt so alone and lost. I laid there, and for the first time in a while I ‘spoke to him’. I begged him, if there was any way to tell me, to please let me know that he was ok. I had never made a request of him like that before in my distraught ramblings, but desperation led me to say it without thinking. I also said that we loved him and missed him, and that I didn’t know if I could carry on without him.

I had another of those real dreams again that night. I was sitting in a room, there were other people there but the only ones I remember were a baby on my knee, and George and Toby to my left, playing on the floor. A door in front of me opened, and Jason walked in. He looked sad, but relieved. He walked over and I put my hands on his face, and ran my fingers through his ginger hair. My hands could feel how warm he was. He spoke to me, and told me that he was ok. He loved us and missed us too, but we were going to be fine. He hugged me and we kissed, and then he was gone again. The only way to describe it was that it felt real.

At the points I needed him most, these three ‘experiences’ happened. Wether he visited me, or my mind created them, knowing I needed a lifeline, they came at the perfect times. They gave me a comfort that I have never felt before, and, whatever they were, I needed them and will treasure them forever.

P.S. Tomorrow is my Wedding anniversary, so expect a post filled with amazing-ness about our wedding, such as this beauty… 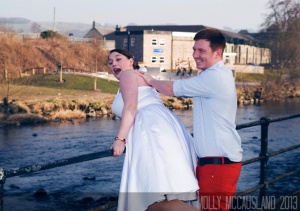