Skip to content
Lots of people have asked how Jason and I met. I have been reluctant to post it, as it isn’t a huge romantic tale.

Parts of it weren’t ideal. But the end result was perfect.

So for that reason, I am happy it happened.

He shared a house with my then best friend, and her friend, who also happened to be Jason’s Girlfiend at the time.

The house was awful. There were 4 or 5 dogs, there was a rabbit that lived in the kitchen, and they were all smokers so you can imagine the smell in that house. There was mould all over the ceilings and unwashed pots on every surface.

I went round one evening to get ready for a night in town. I had heard about Jason before, but never met him. He had offered me and my friend a lift into town that night.

The first time I met Jason, it was NOT love at first sight. I thought he was a smelly gross chav. His hair had enough gel to use as wallpaper paste, and his tracksuit bottoms with holes in were not becoming of anyone. When we went in his car into town, I sat in the back, between energy drink cans and McDonald’s boxes. The music he had on was truly awful. It was some sort of drum and bass, and all I knew was that this boy better hurry up and drop us off. My friend ran into a shop on the way, and Jason and I sat in silence in the car. I had nothing in common with him.

A week or two later I was round again. This time for the evening. At some point whilst I was there, Jason arrived home from a long day at work. As soon as he got in, he started trying to tidy up and was apologetic for the state of the place, something which the two girls had never done. We exchanged polite chit chat, but still…gross chav.

We met in passing numerous times over the weeks, and each time we spoke, I could see that actually, he was a really sweet person. He worked incredibly hard, and was still expected to do everything round the house when he got in. At that point though, it was none of my business!

There was a Birthday night out planned for my friend, and I was told that Jason would be joining us. His Girlfriend at the time had to work, so wouldn’t be there. That night he was like a different person. Funny and charismatic, he seemed completely different to when I had seen him at his house. He seemed happy, something I had never seen before. He was wearing jeans and a shirt, and for the first time, I looked at him and could see that actually, he was incredibly handsome!

That night, the night when this photo was taken, we all drank, danced and laughed as a group. Jason, my friend and I shared a taxi, and they were dropped off before me. As he got out, he put his hand on my knee, smiled at me, then got out. Nothing more, but at that moment, I really liked this guy. I could obviously not say anything though, he had a girlfriend.

A week or two later, my friend had a first date to get ready for. I went to her house whilst she got ready. Whilst there, Jason arrived home from walking the dogs. He was shaken and out of breath. Someone had kicked one of the dogs, and upon confronting him, the man had pulled a knife out. Jason managed to run off, and wasn’t followed. Jason decided not to call the police as he had no information to give them.

My friend left for her date, and Jason and I sat on the sofa, watching ‘Cars’ (yes, the Disney film). We talked in a way we had never talked before. He told me about his plans for work, and his desire to move to Scotland to live. I had never seen that in him before.

His girlfriend arrived home, and instantly started shouting at him. Talk about feeling like a gooseberry. She screamed that he was wrong to not have called the police. She told him he was stupid for walking along the canal. She told him is was a terrible idea to confront someone for kicking the dog.

Jason returned to being the quiet, apologetic person I had met the first few times I saw him.

They continued to argue. I needed to leave anyway, so said I was going, but Jason told me he would give me a lift home as he was going to his Mum’s.

In the car on the way to my house, Jason started to get upset. He pulled over and it was like a tidal wave of emotion was released. He was deeply unhappy. He felt like a slave in his own home. He was shouted at and belittled every single day by a woman that quite frankly, treated him like shit. He had no confidence. I told him that if he was so unhappy he should leave, but he said words that will stick with me forever, “But I know that no one else will ever want me”.

So I kissed him.

I accept that it was wrong to kiss a man that was in a relationship, but this was a relationship he couldn’t see a way out of. He was worried about being alone. He had been so berated for years that he was a prisoner in that relationship.

I gave him hope of something outside of that misery. Not necessarily with me, but with someone.

He told me he had liked me for ages, and never thought someone like me would look twice at someone like him. He said I was much too good for him, but I had seen past that by this point.

He went back that night and ended things with his girlfriend and moved back in with his parents.

We started dating a couple of weeks later.

But our relationship turned out to be totally perfect. 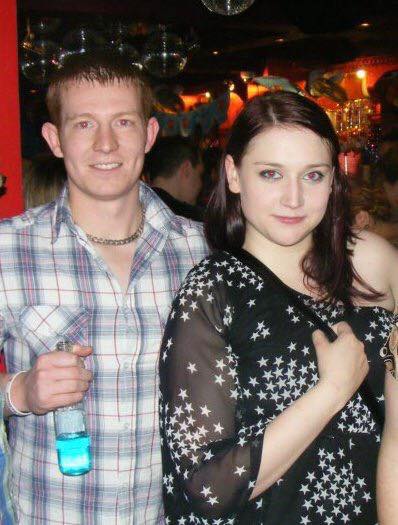